Just in Case I Need to Sell Houses in the Afterlife… 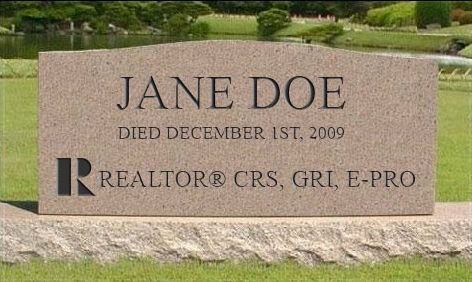 …I can announce my arrival with a business card that doubles as a head stone.  (padum, bump)
I’ve been sick with a cold/swamped with work duties the last few days (almost all performed from the comfort of my couch/recovery bed), so have nothing awesome, or even interesting to report about San Francisco Real Estate.
But I have been reading articles and commentary about the newest rule change at the National Association of Realtors and pondering the move.
I would have LOVED it is it was something like forced transparency to the public on every level, or something that would help our rep instead of hurt it.
Instead, they made a new policy that allows the use of the REALTOR(R) trademark on headstones.  Yup.  Just in case you get up to the pearly gates of heaven and you realize you forgot your business  card, you can just point down to earth right at your headstone.
Um, no thanks, not for me.  Besides, I’d rather end up as fertilizer than as landfill, so I won’t need much of a headstone when I’m gone someday anyway.
Oh, and the article that I think best sums up a variety of reasons we don’t want to do cheesy things like this points out that:

In a Harris Poll released in August it was noted:
“[in] a survey of thousands of consumers ask[ed] to talk about different job classifications [] it used to be that Real Estate agents were ahead of used car salesman but now they are dead last.”
It gets worse. Another report released this year by Readers Digest (Australia) asked respondents to list the most trusted professions. Domestic cleaners, bartenders and sex workers topped real estate agents.

Sigh.  I guess soon we can replace lawyer jokes with REALTOR(R) jokes.  Thanks for helping the image, NAR, thanks.

Posted in Misc Musings from Your San Francisco Realtor