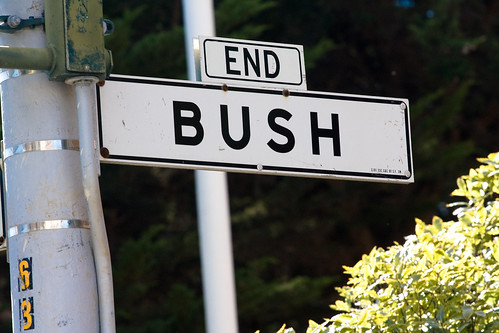 If you want to celebrate the End to Bush and the Beginning of an Era of Change with Barack Obama, you have plenty of options in the City.  This San Francisco Realtor would love to join the festivities, but I’ll be sitting at home, fighting a cold and keeping my germs to myself.  I’m considerate like that.

Your 2009 Inauguration options in San Francisco (compiled from About.com):

Inauguration Simulcast at Civic Center
Civic Center Plaza – In front of San Francisco City Hall
7:00a to 12:00p
Join NextArts for the simulcast. No entrance fee but organizers ask that you bring new socks or underwear as a charitable donation. Items must be new.

Inaugural Ball at Electric Works
Electric Works – 130 8th Street
6:00p to 10:00p
Benefiting the San Francisco Food Bank, suggested donation $10. Inauguration speech will be re-broadcast at 7:00p, with dancing from 8:00p on. Drinks and light hors d’oeuvres will be provided. Formal dress suggested but not required. (Changing rooms and borrowed finery will be available for those coming directly from work.)

Inauguration Viewing at SF Public Library
Koret Auditorium at the Main Library (100 Larkin St at Grove)
Doors open at 8:45a, tickets can be obtained in advance at the General Collections Reference Desk (3rd floor)

Inaugural Night Celebration & Art Exhibit
Garage Gallery – 655 Bryant
GarageGallery will be presenting an Obama environment for people to gather and celebrate this momentous occasion. Share a night of celebration and art with your fellow citizens, as we look forward to a future of hope. Experience a multi-media environment of music, Obama’s Inaugural Speech, photography of Obama’s campaign and art inspired by him.